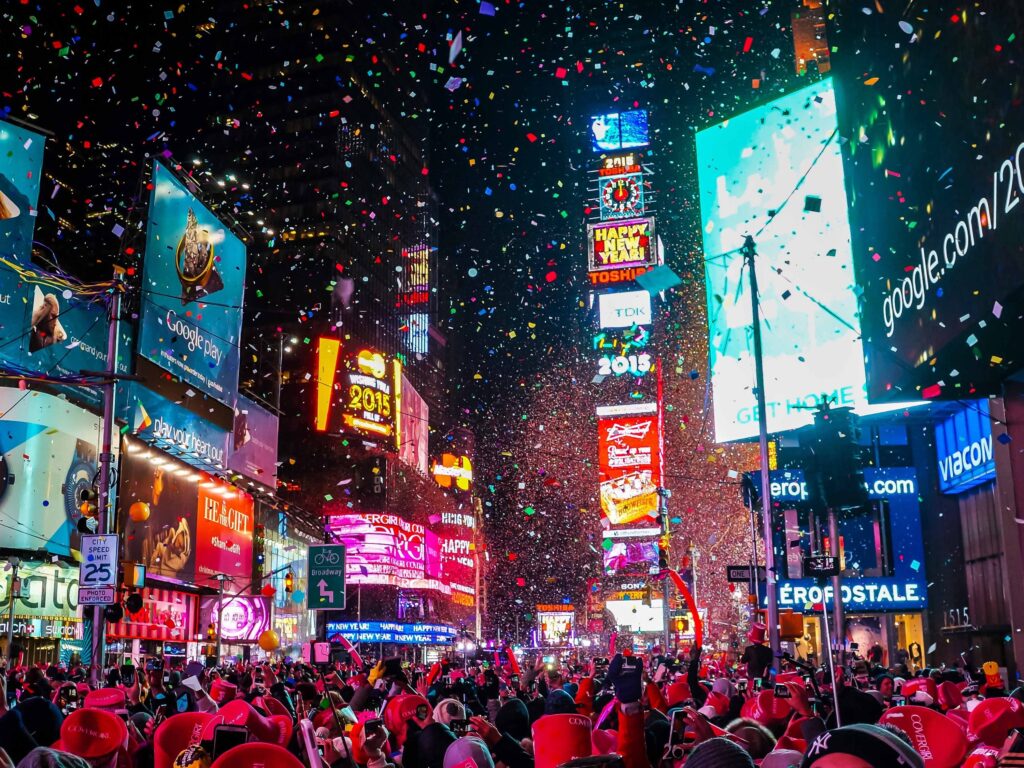 In New York, it is not even necessary to remind you, there is certainly no shortage of things to do: even a now abused cliché like that of the “city that never sleeps” is not enough to do justice to the liveliest metropolis on the planet, where any event or show show gets here before anywhere else in the world.

Of course, New Year’s Eve is no exception… it is so memorable that it has been immortalized in numerous films that have entered collective imagination: just think of Billy Crystal’s declaration of love to Meg Ryan, with Auld Lang Syne in the background. , in ‘When Harry Meet Sally’, or the legendary “Shut up and deal” delivered by Shirley MacLaine to Jack Lemmon in “The Apartment”.

NYE par excellence is in Times Square, one of the most famous squares in the world, the large ball placed on the roof of One Times Square descends approximately 141 ft in 60 seconds at 11.59pm till midnight, signaling the beginning of the new year. It is a very crowded event… therefore arrive well prepared… it is quite cold, usually, and there are no bathrooms) but the whole experience has an indescribable charm. There are always live concerts with the biggest pop stars. To get a seat, however, you must show up at least at 3pm….

Hold a nice hot chocolate in one hand and film the many splendid fireworks with the other! Choose between between Central Parks Prospect Park, or the Brooklyn Bridge (reservations required) and of course Times Square: you will be spoiled with choices for a traditional show that is loved by everyone.

If you are not afraid to splurge a little… the New Year’s Eve parties in the Big Apple are exclusive and lively, ideal for celebrating the new year in style.

For those with energy to spare, an interesting, healthy and active way to celebrate New Year’s Eve is to participate in the midnight race with New York Road Runners: 4 miles. You’ll find entire families running too! Kids will love face painting with neon colors that glow in the dark.

Surrounded by lights, sounds and colors New York is likely to be excessive, especially for those who are not used to it, a good antidote to the madness could be a more peaceful and thoughtful celebration. At the cathedral church of St. John the Divine, a true New York institution, the choir and orchestra will delight listeners with compositions by Haydn (including the Te Deum)…

Another truly amazing experience to admire the beauty of the New York skyscrapers with the backdrop of fireworks that explode in the sky is the ocean. At the New York Harbor it is possible to book a ride on comfortable boats- from ultra-luxury yachts dress code: tuxedo and cocktail dress to bigger – waiting for the new year immersed in a panorama that has no equal in the world is breath-taking.

NYE AT ONE WTC

The Freedom Tower, or One WTC, is the tallest skyscraper in New York City and it has quickly become a symbol in the hearts of all the city’s inhabitants, because it was built at Ground Zero. There is always an exclusive party organized here – with top DJs, starters from 9pm to 11pm, desserts from 11pm to midnight, chilled champagne and open bar, as well as a view that will leave you breathless. The observatories on the 100th and 102nd floors are something worth experience.

The most famous city park on the planet is another popular destination to wait for the new year, and it’s a lot less crowded than Times Square. At midnight, there is a 15-minute fireworks show, the fireworks are fired from the Naumburg Bandshell area. In addition, you’ll always find something to eat around here, for those who do not want to face the wait – not as stressful as of Times Square – with an empty stomach.

Away from the madding crowd? And why not try the Roosevelt’s island… located between Manhattan and Queens, you can comfortably take the cable car from 2nd avenue and enjoy the spectacle a stone’s throw from Manhattan. There are no crowds in this area and you may enjoy a splendid view of the East River: the landscape is breathtaking for those who want to take a stroll observing the luminous skyline. Around one in the morning, you can dive into the celebrations without having to spend hours and hours standing to see the Ball Drop in Times Square.

The Broadway lights and music plus the dozens of theaters and concert halls are located in the heart of New YorkCity: the theater district. Go for a timeless classic or enjoy an irreverent cabaret or burlesque show!