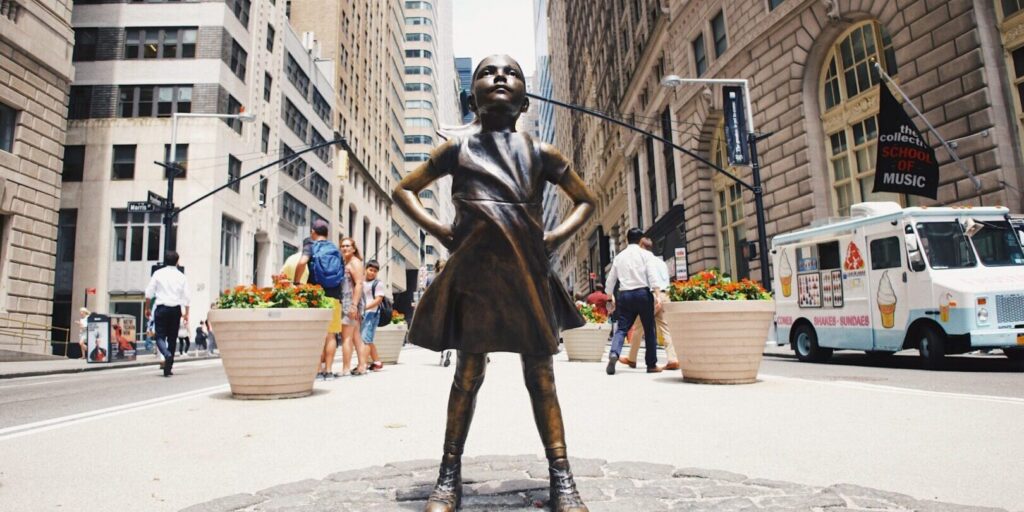 Wall Street is one of the most famous and incredible streets in New York, around it the Financial District of Manhattan is articulated.
Walking through its streets on weekdays is immersing yourself in a world of suits, heels, ties, lots of coffee and smartphones. It is the neighborhood of the top executives of international finance.

The Financial District is much more than the Stock Exchange and the most photographed bull statue. It has other very interesting places like the Federal Reserve Bank and its gold bullion vault that you can visit for free.

On the streets of Wall Street you will come across buildings with monumental Greek-inspired architecture. Columns, capitals and marble are found in this area.
Try to get around Wall Street on weekdays, as it gets even more boring on the weekends.
The New York Stock Exchange (11 Wall Street) is a Manhattan icon and a monument to the lifestyle admired by followers of financial wizardry. It is one of those buildings of neoclassical architecture that cannot be visited since the attack on the Twin Towers. So you have to settle for photos from outside.
The Charging Bul, symbol of the Financial District of New York, has a very particular history, since its sculptor, the Italian-American Arturo di Modica, installed it in 1989 without permission in front of the New York Stock Exchange, in an act of “ artistic vandalism.
Given the good reception from New Yorkers, the city council decided to move it to Bowling Green Park, the oldest small public park in New York.
What few know is that the monument remains the property of the artist, he never sold it or donated it to the city of New York. In fact, it is for sale, provided the next owner agrees to leave it in its current location.
This charging bull is one of the most visited places by all tourists in the world, so it takes a lot of patience to take a picture and touch its butt, a tradition to attract good luck, it is said.
Due to the number of tourists that come to this small park, there are plans to move the bull to another part of the city.
The sculpture is a bull, the symbol is of strength and power; it is found folding its front legs and with its head slightly lowered as if it were about to charge, which represents the American people standing up to the financial powers.
Di Modica spent all his savings, $300,000, to create and carry the bull after the 1987 stock market crash, as a symbol of American strength and power. The sculpture was the artist’s idea and not the city’s, as has been said. In an act of guerrilla art, he carried the statue on December 15, 1989 in front of the New York Stock Exchange as a Christmas present for the citizens of the Big Apple.
Public outcry grew for the New York City Department of Parks and Recreation to place this sculpture in Bowling Green at the end of Broadway.
This great monument is one of the most photographed works and has become a tourist destination in the Financial District in which it is located. In addition, it has unofficially become the symbol of the Financial District, and is often talked about in the media, always giving it an air of optimism and economic prosperity.
In 2004, Di Modica announced that the sculpture was for sale because he had no money to pay for his trip to New York, on the condition that it not move from its current location.
The author continued with the rights to the statue. In 2006, Di Modica sued Random House and other companies because they were profiting, violating copyright, selling replicas of the bull, and using his image in advertising campaigns.
In the Financial District you will find the Federal Hall National Memorial (corner of Wall Street and Nassau Street), the former Congress in which George Washington was sworn in as the first president of the United States at the end of the 18th century.
This building was later a customs house, then part of the United States Department of the Treasury.
Today it is a memorial museum to George Washington, which can be visited for free.
A few steps from the stock market is the Federal Reserve Bank of New York (33 Liberty St), according to many analysts it is the most powerful bank in the world.
Very few know that guided tours are offered free of charge from Monday to Friday to see its museum and the gold vault. There are few seats, so you have to sign up on their website a month before the day you plan to visit.