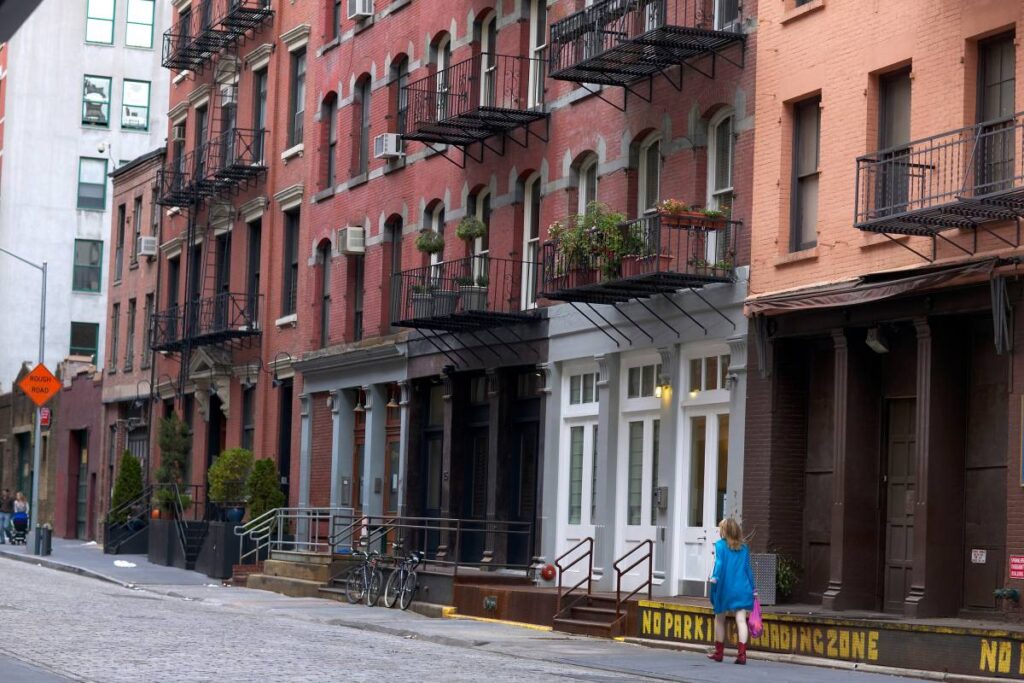 TriBeca The Trendy and Historic Neighborhood

TriBeca The Trendy and Historic Neighborhood

TriBeCa is without a doubt one of the trendiest neighborhoods in New York. Its letters stand for “Triangle Below Canal Street” (triangle below the channel, referring to Canal Street). Located south of SoHo in Manhattan, it is bordered by Canal St. to the north, Broadway to the east, Chambers St. to the south, and the Hudson River to the west.

Although it is now a super modern and renovated neighborhood, it used to be an industrial neighborhood. Due to low rental prices, it became an important community for artists in the 1970s.

Since then, it has been transformed into an exclusive residential neighborhood, and many celebrities have established their residence here attracted by the bohemian air hosting celebrities such as Taylor Swift, Scarlett Johansson, Heather Graham, Mariah Carey, Justin Timberlake, Meryl Streep, Leonardo DiCaprio, Beyoncé and Jay Z among many others. Part of the fame that TriBeCa has gained is due to the efforts made by the New York actor Robert de Niro (who also lives in TriBeca), creator of the Tribeca Film Center and the TriBeCa Film Festival.

One of the most outstanding characteristics of this neighborhood is being able to walk through its streets imagining what New York was like in the past, however, immediately a skyscraper appears from above and reminds us that we are in the present.

TriBeca is the fusion between the old New York that is still preserved and the new constructions, many of them futuristic. The best time to visit it is at sunset, when the shops are open, and the bars and restaurants start to get busier.

Things to do in TriBeca:

– TriBeCa Film Center (375 Greenwich St): These are the film studios that Robert de Niro opened in the neighborhood to bring together and support the New York film community. The building is accessible from Monday to Sunday 24 hours a day.

– Tribeca Cinema: For those who have seen the classic cinemas with white signs and black letters in movies or series, this is the time to meet one of them in real life. The Tribeca Cinema is a cinema with a retro look, but its facilities have state-of-the-art technology. It has a bar and areas for recreation. If you visit Tribeca during the spring, you can attend the Tribeca Film Festival.

– New York Alleys: TribeCa alleys are used in famous police and thriller movies. There is the Staple St. Skybridge which is the iconic closed bridge that spans the alley of Staple Street connecting two old industrial buildings. It’s great for taking amazing photos at sunset.

– Fleming Smith Warehouse: Located at 135 Watt Street, at the corner of Watts and Washington streets, it is one of the warehouses that is still standing. The building is beautiful and worth visiting. On the west side you can see huge copper numbers with the date of 1891. This building retains the status of historical heritage.

– Ghostbusters Fire Station: Located at 14 N Moore St, it is the famous fire station that appears in the Ghostbusters movie. Something very striking is to see the firefighters who serve the public, who are very proud of the film and are very attentive to tourists. On the ground is the logo of the ghostbusters to take an unforgettable photo.

– The Mysterious Bookshop: Located at 58 Warren St, it is one of the best bookstores in New York and has an incredible collection of mystery novels. It is a tourist attraction and a favorite for fans of the police genre, crime novels, and intrigue stories.On the high wooden shelves are the old volumes in perfect condition, among autographed books and a large collection of Sherlock Holmes or Agatha Christie.

– Tribeca Grill: Located at 375 Greenwich St, this restaurant that offers Mediterranean cuisine is co-owned by Robert DeNiro, so the atmosphere is elegant and exclusive. Although it is usually always full of people, it is a very pleasant and warm place. As suggested dishes you can find the salad with mozzarella and the crab cake.