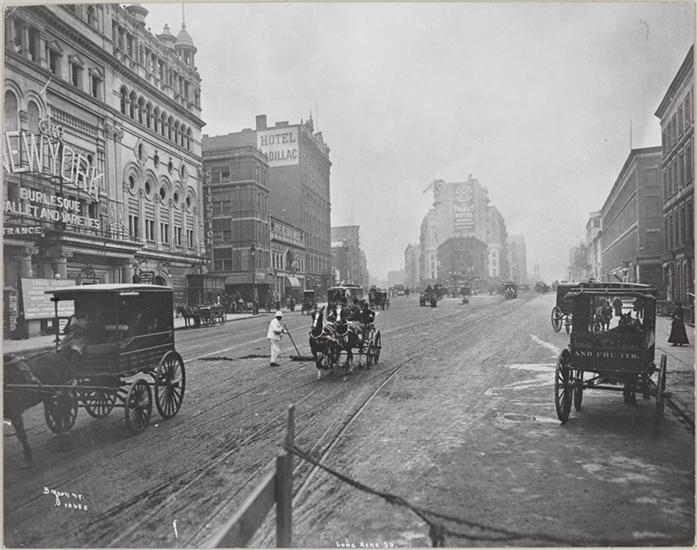 The History of Times Square

The History of Times Square

Times Square is known for being the heart of New York City but it wasn’t always like that. Since the beginning of the 20th century, when these lands belonged to John Scott, until today, many things have happened that have led it to become the center of attention for citizens and tourists, and a must-see place to stop to take a photo. To remember.

In 1523, Francis I of France convinced the Florentine navigator Giovanni da Verrazano to gather a fleet to discover a maritime access to China through the Pacific Ocean, traveling west. For this reason, and after passing through the coast of North Carolina, on April 17, 1525, the sailor, at the service of the French crown, arrived at the island of Manhattan and baptized it with the name of New Angoulême, in honor to the duke who had financed his trip. At that time, this area was inhabited by the native Algonquians and Iroquois.

Almost 85 years later, on September 2, 1609, it was the explorer Henry Hudson, in the service of the Netherlands, who arrived and toured the bay. For this reason, the river of about 315 miles in length, which forms the border between the states of New York and New Jersey, bears his name.

As Hudson acted on behalf of the Dutch rulers, citizens of that nationality were the first to settle in what is now New York, building the first European settlement in 1614, calling it Fort Nassau.

During the early years of its founding, this area was sparsely populated as boaters spent more time in the woods and concentrated upriver from the Hudson, in the region of what is now the New York State capital, Albany.

The most intense arrival of settlers in Manhattan began in May 1623, with the landing of a 260-ton ship carrying thirty families. The group was made up of 110 men, women and children who agreed to settle in the newly founded village for a period of six years. These brought cattle, grains and agricultural implements.

In 1626, Peter Minuit, governor of the Dutch “West Indies” company, as they were known at the time, bought Manhattan Island from the locals for $24 and created a specialized fur-trading colony. with the natives, which he called New Amsterdam.

The first years were very difficult since the number of settlers was growing, as well as vices, crime and attacks by the natives, who sought to recover the territory.

At that time there was a maritime rivalry between the Dutch and the English that calmed down with the signing of the Treaty of Breda in 1667.

However, it was in 1674 that the Westminster Peace Treaty was signed, definitively ending the Third Anglo-Dutch War, regulating trade in the area and ruling the return of the colony of “New Netherlands” to England. In this way the Seven United Provinces on the northeast coast of the United States were called.

As a result of this agreement, the island of Manhattan passed from the Dutch to the English, and the King of England Charles II donated this land to his brother, the Duke of York, which was immediately renamed in his honor.

With the presence of the English, New York gained importance and prosperity as a commercial port, and in 1754 Columbia University was founded, currently one of the most prestigious in the world.

Throughout the 18th century, English settlers clashed on numerous occasions with the French for control of Manhattan, wars in which the settlers managed to involve native groups in their cause.

New Yorkers played an important role in the early days of the American Revolutionary War, organizing the boycott of British goods in 1768. It was also in New York that the Sons of Liberty movement emerged and developed. various battles.

In 1775, the revolutionaries opposed the loyalists to England, and approved independence on July 4, 1776.

After the War of Independence developed, the state of New York ratified the federal constitution in 1788. The following year Congress met in the city and named George Washington as president. For a year, New York was the federal capital until it was moved to Washington DC

Immigration and development transformed the city so that by the 1830s New York became the largest city in the United States.

It wasn’t until 1898 that the boroughs of Brooklyn, Queens, the Bronx, and Staten Island joined Manhattan. This was very important for the development of its famous bridges and the subway in 1904.

During the 20th century, New York received millions of foreigners, becoming the center of European, Asian and Latin American immigration.

After World War II, New York became the most important city in the world due to its economic, political, cultural and tourist preponderance.

As for Times Square, the area belonged to John Scott, a general in the US militia. New York who served under the command of George Washingtonhowever began to forge his identity in 1904, when The New York Times moved the newspaper’s offices to a new skyscraper on 42nd Street in Longacre Square. In 1913 it moved back to Broadway.

As New York City grew in the 20th century, Times Square transformed into a multi-cultural hub filled with theaters, auditoriums, hotels, and upscale restaurants, but also crime, corruption, and gambling.

By the last stage of the 20th century, thanks to the efforts of all state institutions, the situation was improving, and decisions were made so that this area began to be considered as the heart of the city of New York and the tourist center, cultural and gastronomic par excellence of the country.