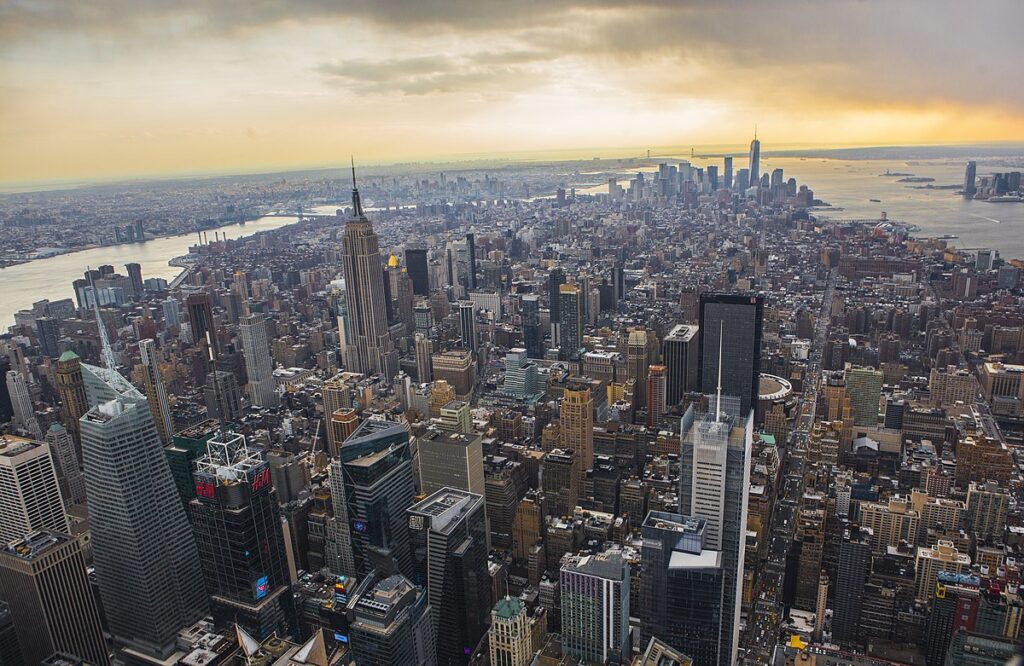 The island of Manhattan is located at the mouth of the Hudson River and is part of the five communes that make up New York City. Its boundaries are the same as New York County and comprise not only the largest island but also a large number of smaller islands and a mainland.

In the city there are speakers of approximately 96 different languages. The majority of the population speaks English with 59.1%, Spanish is the second with 24.9% of speakers, Chinese with 5%; and the rest of languages ​​does not reach 1%.

Its name derives from the word Manna-hata, which means “island of many hills” in the Lenape language.

Manhattan concentrates 90% of the places to visit New York and is made up of different areas, with characteristics specific to each region:

Midtown Manhattan: Extends from 14th Street to 59th (South end of Central Park). Its most important part and the one that concentrates the largest number of skyscrapers begins on 33rd Street. Here are the Empire State Building, the Rockefeller Center complex, the Chrysler Building, Times Square, and many other attractions for the millions of tourists who visit area.

Upper Manhattan: The upper part of Manhattan begins in Central Park and ends at 96th Street. In the western part, this area extends and includes in its domains Columbia University, one of the most prestigious in the world, and the Cathedral of San Juan el Divino, popularly known as “San Juan la Inacabada” or “San Juan la Interminable”, due to the constant construction and restoration works.

Harlem: This area begins where Upper Manhattan ends and ends at 155th Street. Its most important street is perhaps 125th, where the famous Apollo Theater is located. This is the most famous popular music club in the United States and one of the most relevant in history because performers such as Ella Fitzgerald or Michael Jackson gave their first concerts there.

Washington Heights: This part of Manhattan runs from the north of the island (220th Street) to Harlem. Its name comes from Fort Washington, an 18th century fortification to protect the area from British forces.

Although each sector has its characteristics, attractions and charms, the south of Manhattan is the most recognized and important place for the country’s economy. This area has a very rich history since the development of New York itself began there and today it houses Wall Street, the financial district that determines the world economy.

New York’s economy is the largest regional economy in the United States and the second largest urban economy in the world after Tokyo, Japan. Anchored by Wall Street in Lower Manhattan, New York City is the financial capital of the world, along with London, and is home to the New York Stock Exchange, the largest stock exchange in the world by market capitalization of its listed companies. .

Manhattan is distinguished by its high concentration of the advanced services sector in fields such as law, accounting, banking, and management consulting. The financial, insurance, health care and real estate sectors form the basis of its economy.

The city is also the most important center for mass media, journalism, and publishing in the United States, as well as the country’s preeminent center for the arts. These creativity-based industries, such as advertising, fashion, design, and architecture, make up a growing proportion of employment today.