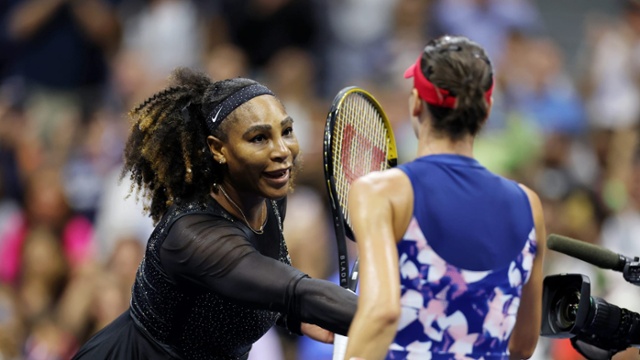 An unforgettable night, the US Open gave us, with the imposing Arthur Ashe full, decked out in all its lights for the last match of one of its great stars, the one who celebrated the most times on this stage: Serena Williams. It was one of those days in which everyone wanted to be present, and say goodbye to who is considered one of the best tennis players in history, and at least, the most outstanding in this century.

The number 1 in the world, as she had already announced a few weeks ago, decided to say goodbye to the world of tennis, that planet that she ruled with power and a lot of charisma and where she entertained millions of fans around the world. Almost 41 years old, Serena begins to say goodbye. But retirement can still wait: at least on Monday night, he had the pleasure of beating Montenegrin Danka Kovinic 6-3, 6-3 in his debut, in one hour and 40 minutes of play.

Kovinic, 80th in the world ranking, unknown to many, had the ungrateful role of being the opponent, perhaps being the one in charge of firing a sports legend; a situation that Juan Martín del Potro went through ten years ago, also here, when he eliminated another former number 1 like Andy Roddick in his last game. Kovinic, 27 years old, was chosen by the previous draw as a rival for the first round of that emotionally difficult challenge.

Ever since Serena hinted that New York would be the venue for her last tournament, ticket sales have skyrocketed. When the day and time of the meeting was confirmed, sales multiplied. More than 23,000 spectators in the stands of the largest tennis stadium in the world, including the former president of the United States, Bill Clinton; Mike Tyson and actor Hugh Jackman. Another big crowd outside, following the game on the big screens. Serena entered the court with a party look, according to a gala night, concentrated as she could; In one of the boxes, there was her whole family, including her husband, businessman Alexis Ohanian, and little Olympia, her daughter, who wore braids with white appliqués, like when her mother won at Flushing Meadows 1999, when she was just 17 years old.

The expectation was so great that the US Open, the last major of the season, set an all-time attendance record for night sessions on opening days, with 29,402 spectators. Total attendance for the day was 71,332 people. A huge movement of people.

During the game, as could be expected, nerves and anxiety abounded, there were inaccuracies, unforced errors, double faults. Serena pulled through the first set 6-3 in 55 minutes.

Despite fears, Serena saw a place to go further, very focused, she took the match in straight sets. To extend the farewell. The tennis queen’s retirement can wait and be another day. Billie Jean King also arrived, no less: the woman who gives her name to the immense High Performance complex of the United States Tennis Federation (USTA) and headquarters of the New York Grand Slam, who saluted her contribution to racial equality and diversity -Billie Jean has been a militant of social causes since her time as a player, to later give way to a video of thanks. Serena Williams got used to always fighting, until the last point, and she did so on Monday.

After her emotional victory in the debut of the US Open, Serena Williams faces a major test against the Estonian Anett Kontaveit, world number two, who could be in charge of ending her remarkable career.

Kontaveit anticipated the great environmental pressure that will be against him and made it clear that he accepts the challenge of, perhaps, being the last rival of Williams. “I really want (to play against Serena). I really wanted her to win her first match because I have never played against her. And this is my last chance. Better late than never”, she assured after beating the Romanian Jaqueline Cristian (77) in straight sets.

She stated that she will not be intimidated by facing “the best player of all time” pushed by the 23,800 fans that packed the Arthur Ashe court.

“I’m going to fight as hard as I can, on every point,” promised the 26-year-old tennis player, whose best result in a Grand Slam is the quarterfinals of the 2020 Australian Open. In seven appearances in New York, Kontaveit has not surpassed the second round of a US Open, a tournament that Serena has won six times, the first when she became known to the world in 1999 at the age of 19.