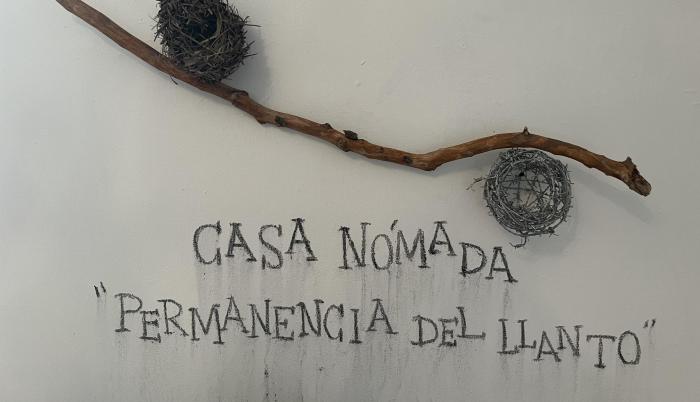 Some 200 artists will gather this fall in different galleries in the Big Apple to participate in the second edition of the New York Latin American Art Triennial (NYLAAT), which began on Sunday on Governors Island.

The painter, Miguel Betancourt, born in 1958, and considered one of the most important in Ecuador, will participate in the Triennial of Latin American Art in New York, which will take place under the theme of “Abya Yala: Structural Origins”, between September and December .

The artist has developed the works that he will present on fabrics and papers of different origins.

The production of some 230 Latin American artists who live and work inside and outside the United States will also be presented at the event.

Betancourt commented that his proposal “has to do with traces seen in bowls and ceramics found in different cultural areas of the coast and the Andes, a large region located in western South America, of which Ecuador is a part.”

He also commented: “Graphics, undulating lines and the colors that make up” his pictorial palette are born from these ceramics, and he noted that “thematically the faces and bodies, paraphrases of pre-Columbian images, also entail approximations to Western art.”

Although the artist uses a wide range of colors, in almost all of his sequences the color blue plays a very important role, as it refers to the Andean sunrise, to certain flowers in orchards and fields. “This is a color that my palette identifies with: blue brings intimacy, reflection and a ceremonial atmosphere to the characters, usually in earthy colors,” he explained.

“These fabrics are rustic -for non-pictorial use-, with a color analogous to the earth and favor textures. On these supports I have recreated landscapes and faces inspired by ancestral cultures”.

Betancourt has presented his works in the United States, Ecuador, Chile, Spain, Italy, China, Japan and Mexico, among others, and has received several awards, including the Pollock-Krasner award conferred in 1993 by the homonymous foundation in New York.

His work can be found in the collections of the United Nations Pinacoteca, in Vienna and Geneva, the Inter-American Development Bank (Tokyo), the Diners Club of Ecuador, the Italo-Latin American Institute (Rome), the Museum of Art of the Americas, OAS (Washington D.C.), at Slade School of Fine Art (London), at OFID (the OPEC Fund for International Development), Vienna.

The Latin American Art Triennial explores what past generations felt, within the aesthetics, cultural or social values ​​present in contemporary art in Latin America.

In the exhibitions that make up this edition, an attempt is made to establish the link between contemporary art on the continent and the premeditated use of indigenous materials, elements and forms of expression of the first inhabitants of this region.

On this island located in New York Bay, from which you can see the Manhattan skyline, a dozen Latin artists are exhibiting from today until mid-November.

“La Chakana Florida”, by Ecuadorian Carmen Vicente, is the work that welcomes visitors. Chakana in Quechua means stairway to heaven.

Suspended from the ceiling are 12 reed crosses, wood also known as bamboo, and inside the crosses there are some 1,500 “little people” and cloth babies that give color to the work.

“It is a composition about the Andean symbol and that of other cultures of the earth,” the artist explains to Efe, who says that, “like the immigrants of the earth,” her work has “hundreds and hundreds of little people” and that the babies in the center represent “the new generations”.

For his part, the Panamanian Apanalexander Wtges chooses to omit color and give prominence to black in his geometric designs on cardboard and fabric that are on the second floor of the gallery.

Wtges explains that when thinking of “Latino art” many imagine works with many colors, but that this is a stereotype that is not entirely true since many Hispanic artists opt for a more sober palette, both now and in the traditional art of the region. Also on the second floor is a “paper maze” created by Dominican artist Wildriana Paulino.

According to Álex Fernández, one of the curators of the work, the artist used “paper made from banana leaves” to create this installation.

Fernández, who is also an artist and exhibited at the last NYLAAT, explains that they invited several Latin American and local artists to participate and that they also made an open call to all artists.

“The philosophy and ideology of the triennial is not only to open the doors to those of us who are here, but to open the door to artists who do not have a voice. That is why we did this double process.”

In addition, according to the organizer Luis Stephenberg, in this edition for the first time the space will also be given to Latino graffiti artists who live in New York and others who live in Puerto Rico, Cuba and the Dominican Republic.