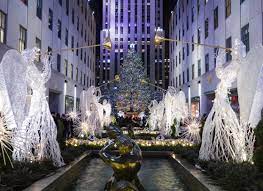 The Christmas Tree at Rockefeller Center has been a tradition for

for more than eight decades, illuminating Rockefeller Plaza every season

christmas. The lighting ceremony, on November 30, will feature

performances and classic holiday songs from artists to be announced

coming soon, and the tree will be on view until mid-January.

The humble beginnings of this traditional ceremony date back to 1931, during the Great Depression, when magnate John D. Rockefeller decided to build this spectacular complex with the intention of revitalizing the Manhattan area.

That year, and on Christmas Eve, construction workers decorated a 20-foot fir tree with cranberry strings, handmade paper garlands, and some tinsels that added glitter.

Back then, no one imagined that, over the years, the Rockefeller Center fir tree would become the most famous Christmas tree in the world.

So, in its 90th edition, the lighting of the Rockefeller Center tree will be on NOVEMBER 30, 2022.

Two hours before, starting at 7:00 pm there are live performances, with the famous Rockettes from Radio City Music Hall and prestigious artists.

The celebrities who will participate in the 2022 event will be announced closer to the date.

It is characterized by its very regular pyramidal crown, with the branches arranged ascending near the crown.

It reaches its splendor at an advanced age in its life cycle, reaching approximately 70-80 years.

Finding the perfect tree each year is the task of Rockefeller Center head gardener Erik Pauze, who scours the region for candidates and from his experience says, “When I see a perfect tree, I just know it.”

The selected fir is transported to Manhattan and a new specimen is planted in its place.

After its exhibition it becomes valuable construction wood that is donated for charitable purposes.

The moment of ignition is very emotional. Despite the huge public turnout, at that precise moment absolute silence reigns.

That only breaks with the unanimous applause and exclamations.

Except at Christmas, which is illuminated for 24 hours and on New Year’s Eve when the lights go out earlier, at 9:00 pm.

To see the Rockefeller Center tree lighting, it is ideal to be there no later than 3:30 pm to 4:00 pm and ensure a good location to enjoy the show.

You can also watch the national broadcast “Christmas at Rockefeller Center” live from home on NBC, November 30, 8PM EST/7PM C.

You have one of the best views of the complete tree entering Fifth Avenue, from the Channel Gardens, and the row of heralding angels. In addition, it is one of the most photographed sites during the Christmas season.

You can also have a privileged view from the Top of The Rock viewpoint, which is located in the same complex and from the ice skating rink, located just below the tree and the golden statue of Prometheus.

We will see it illuminated by more than 50,000 multicolored LED lights and crowned by a beautiful 70-point three-dimensional Swarovski star covered with 3 million crystals, designed by architect Daniel Libeskind.

The Rockefeller and Bryant Park trees attract all the spotlights, but if you fancy a different experience, you can go to the lights of other Christmas fir trees in New York, such as:

The Washington Square Tree (December 7, 2022). New Yorkers congregate in the square and, between Christmas songs and appearances such as Santa Claus, the beautiful tree is lit in front of the arch.

The Madison Square Tree (December 7, 2022). Head over to the square to see the tree lighting and take part in the holiday activities they organize, all with the Flatiron Building and Empire State Building in the background!