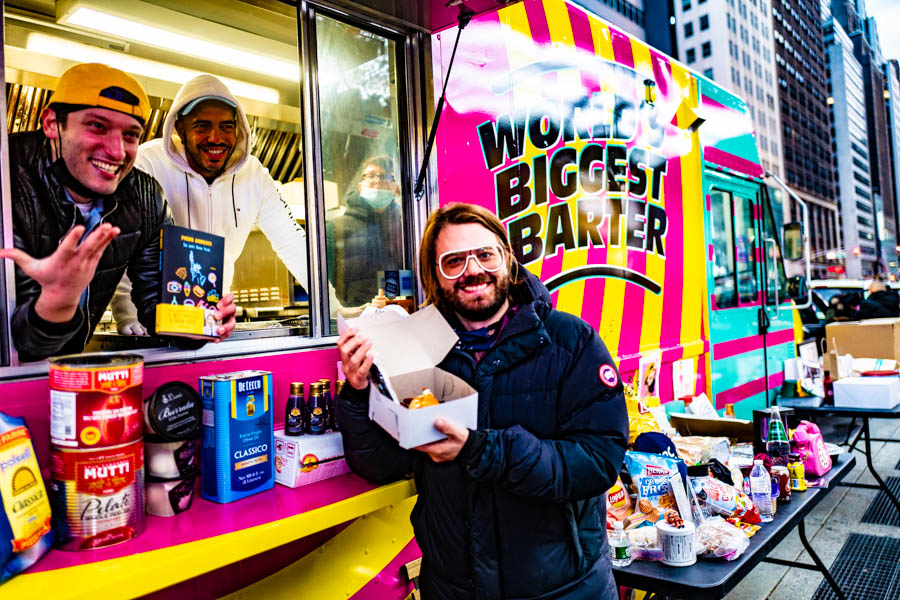 Remember when we organized the world’s greatest barter?

Remember when we organized the world’s greatest barter?

Just like Gabriele Lamonaca’s beloved home city of Rome, “Unregular Pizza” was not built in a day. Having spent years in the restaurant business gaining experience in every aspect of the business, Gabriele was ready to finally open his own place, but like the rest of the global population, his plans came to a halt with the arrival of the pandemic.

After weeks of lockdown and yearning for a creative outlet, the Roman born pizzaiolo began experimenting with ingredients and flavor combinations, crafting decadent pizzas (leavened for 72h, baked squared, in the signature Roman style) including his iconic creation; the Burrapizza, where each delicious square slice is topped with a whole burrata! He began a dedicated Instagram account named ‘Unregular Pizza’ and soon his friends started asking for a taste.

Eager to share his creations, Gabriele suggested they do a barter: a pizza in exchange for something else home-made by his friends. As his online following grew, Gabriele bartered with more and more New Yorkers, swapping his pizzas for a range of treats including traditional meals, tempting desserts, home brews and finally experiences such as horse-back rides, a night in a fancy hotel and guitar lessons (the bartering was covered by the media and it launched the pizzaiolo into an unending media storm).

During an unprecedented time of global disconnect and isolation, it was the pursuit of human connections that brought Unregular Pizza to life. Gabriele and business partner Salvatore Gagliardo have committed to keeping this spirit alive by offering in-store weekly barters to lucky followers and restaurant guests! In doing so, he and his team hope to continue to build on the incredible community of barterers they created across the city of New York and beyond.

Unregular Pizza recently established a solid partnership with Jamie Suarez, founder of Welcome To Times Square, a multi-option online and social media platform created for those who plan on visiting New York City. Just like Gabriele, Jamie became creative during the pandemic and undertook the arduous endeavor of building a marketplace from scratch and with one sole aim: bring life back to the Big Apple.

Days from the app launch,  Jaime Suarez had been defining strategies that could help small businesses that need that extra boost… and while talking with the Unregular Pizza team: bartering their Times Square billboard for a special ‘burrapizza’ (a pizza with a whole burrata on top) launch seemed like the way to go!

In fact, back in November, anyone who wished to trade food, drinks, performances (ANYTHING legal really) went to Times Square to join the World’s Greatest Barter event. The unique slice of burrapizza that Unregular Pizza will barter was available on that very day and never again. Participants came up with all sorts of performances and dishes, a feast for the eyes!

The whole event was  filmed and displayed on the Times Square billboard. There were 162 barters in a day.

There is something more to this barter. It is something that touches on profound chords such as the mutual understanding that an NYC urban renaissance is taking place and we must support it in every single way. It is the knowledge that an exchange of passion, which doesn’t involve money, has had positive repercussions on New Yorkers, repercussions that have led to creative results and unbelievable results.

A playful way to eat excellent and irregular Roman-style pizza from a pizza truck in one of the world’s most known squares, as well as market a newborn NYC discovery app in a lighthearted way. A delightful invitation to be happy, an invitation so longed for during these unprecedented times that it cannot be refused.