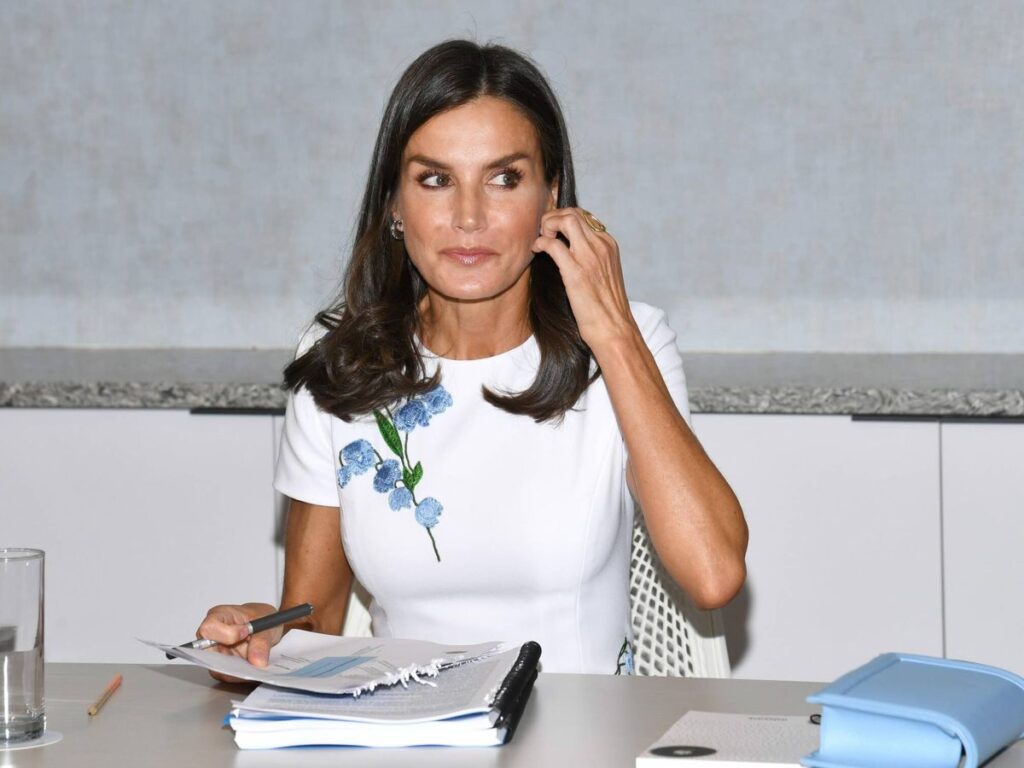 Queen Letizia traveled this week to New York, where throughout the days she attended various events within the framework of the high-level week of the United Nations General Assembly and the Secretary-General’s Summit for the Transformation of Education .

Your schedule has started at the INNSIDE Hotel. There Letizia has attended a meeting with Mental Health experts from UNICEF, an organization with which she collaborates as Ombudsman for Children and Adolescents.

The queen has worn a white midi dress, with bells embroidered in blue. It is a design by Carolina Herrera that premiered last May to receive the emir of Qatar at the royal palace in Madrid. She has combined it with a Magrit bag that matches the flowers on her dress.

Letizia’s commitments in New York prevented her from accompanying the king to Elizabeth II’s second funeral at Windsor Castle. The queen flew to the United States from the British capital shortly after attending the funeral at Westminster Abbey, where the queen already wore a Carolina Herrera design.

Yesterday the Queen held a meeting with Spanish researchers in the fight against the disease, within the framework of the celebration of the ‘World Cancer Research Day’. A meeting that took place at the headquarters of the Cervantes Institute in New York.

Letizia attended, together with the American first lady Jill Biden, the central event of the world day, in which the international organizations that fight against cancer come together to talk about the importance of continuing to investigate and of doing it all as a single team.

This is not the first time that the Queen and Biden have teamed up against this disease. When the first lady was in Madrid last June, on the occasion of the NATO summit, together they visited the Madrid headquarters of the Spanish Association Against Cancer. Nor is it the first time that they coincide this week, since both attended last Monday, in London, at the funeral of Queen Elizabeth II.

Queen Letizia wears several trend-setting outfits in New York. At the Unicef ​​and WHO meeting, the monarch opted for the perfect Spanish-American mix, as she wore a draped red dress from the new Zara collection and the designer of Newark Narciso Rodriguez, one of the favorites of the 90s among New York society, and the favorite of Carolyn Bessette, wife of John F. Kennedy Jr.

As a style detail, in addition to the dress itself, a gesture: wearing a black blazer over the shoulders instead of ‘normal’, a classic of the different fashion weeks, both in the ‘front rows’ and in the ‘ streetstyle’.

To support research and the fight against cancer, Doña Letizia has opted, without hesitation… again for white, with a special nod to the city that welcomes her these days. The white shirt dress with a pleated skirt that she has worn the Queen in her two acts of the day is her particular tribute to New York, almost as if she were silently singing Frank Sinatra’s ‘New York, New York’. Why does that dress say so much, being elegant but with simple lines, practical and off-road? The signature behind it says it all: it’s a Ralph Lauren, a natural brand of the city, where its designer is from, and the epitome of American preppy style. Once again, the length of the dress is midi, preferred by the Queen when she does not opt ​​for a summer miniskirt, which always gives her that impeccable lady touch. The first lady of the United States, Jill Biden, has attended the central act of the ‘World Cancer Research Day’, where she has met Letizia and her dress of the same color. Because white has also been the tone he has chosen for the big day.

In the case of the American, it is also a midi dress, die-cut, with a belt that fits at the waist, just like in the Ralph Lauren design for Queen Letizia.

The two have also coincided in the choice of similar footwear. Both the Queen and Biden have worn shoes in a natural tone, more nude those of the first lady, some Valentino, more brown those of the monarch, some Magrit with crossed straps.

The queen’s tour of New York will continue tomorrow at the headquarters of the Cervantes Institute, where she will hold a meeting with Spanish researchers in the fight against cancer. Finally, he will attend the central event of the World Cancer Research Day with Jill Biden, the first lady of the United States.