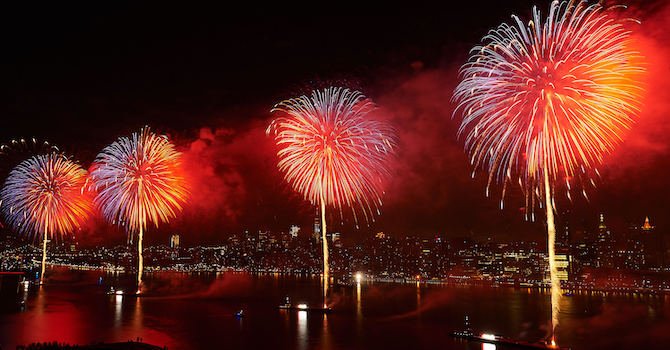 On July 4, the United States fills with flags, barbecues and fireworks to celebrate its most patriotic day: Independence Day.

Americans commemorate the passing of the Declaration of Independence by Congress on July 4, 1776, with a national holiday held outdoors.

On Independence Day, many New Yorkers leave the city for Long Island or Fire Island to barbecue with their families. The trains to the beaches are usually full but nobody is in a hurry that day.

The 4th of July is one of the few days of the year that many stores close. Most clothing stores are not open, and neither are banks, post offices or schools. The museums and for example Top of the Rock and One World Observatory are open. Fireworks are part of a traditional celebration of the United States on July 4, when the Independence Day of that country is celebrated.

The tradition of making a light show with fireworks came to the United States from the 18th century, in a celebration of 1777, a year after independence was declared. That year, a celebration in Philadelphia included 13 fireworks in the Commons honoring the 13 colonies.

When the 19th century ended, Italian migrants, settling in the United States, brought fireworks to the country. The United States now consumes fireworks in massive quantities in honor of the holiday, importing more than 428 million pounds of consumer and display brand fireworks in 2021, according to the American Pyrotechnics Association.

These are some of the fireworks shows scheduled for today, July 4.

Following the “Salute to America” ​​event at the Lincoln Memorial in Washington, the fireworks display began.

For this significant date for all Americans, the city of Los Angeles has several shows on Independence Day. There will be events from 10 am to night, ending with the light show in the sky. In New York, Macy’s annual fireworks show will be on July 4 at 9:25 p.m.

In any case, for those who are looking to live this day in a very special way, we always recommend boat trips as they allow you to see the famous Macy’s fireworks over New York from an unbeatable point of view. In any case, there are many special events and parties that take place during this day in New York, so it will not be difficult for you to find the perfect activity for you.

A good option to enjoy Independence Day and the fireworks is to take a boat trip with dinner included. Both cruises consist of a 5-course dinner with an open bar. On this luxury cruise, you can try different starters and enjoy live music by the DJ. The yacht has a capacity for 200 people and you are expected to dress in your best clothes.

Tourist attractions are operating as normal – The city’s most visited attractions such as the Empire State Building Observation Decks, Top of the Rock, and One World Observatory maintain their regular hours. The same happens with such emblematic points as the Statue of Liberty and the main museums in New York. Daytime boat tours remain frequent, but afternoon boat tours may change to make room for special 4th of July cruises.

The vast majority of New York stores remain open – Although it is a holiday, most stores and department stores in New York remain open. In addition, some stores offer special sales to attract customers on this day off, the discounts are fine but they are not as spectacular as those on Black Friday.