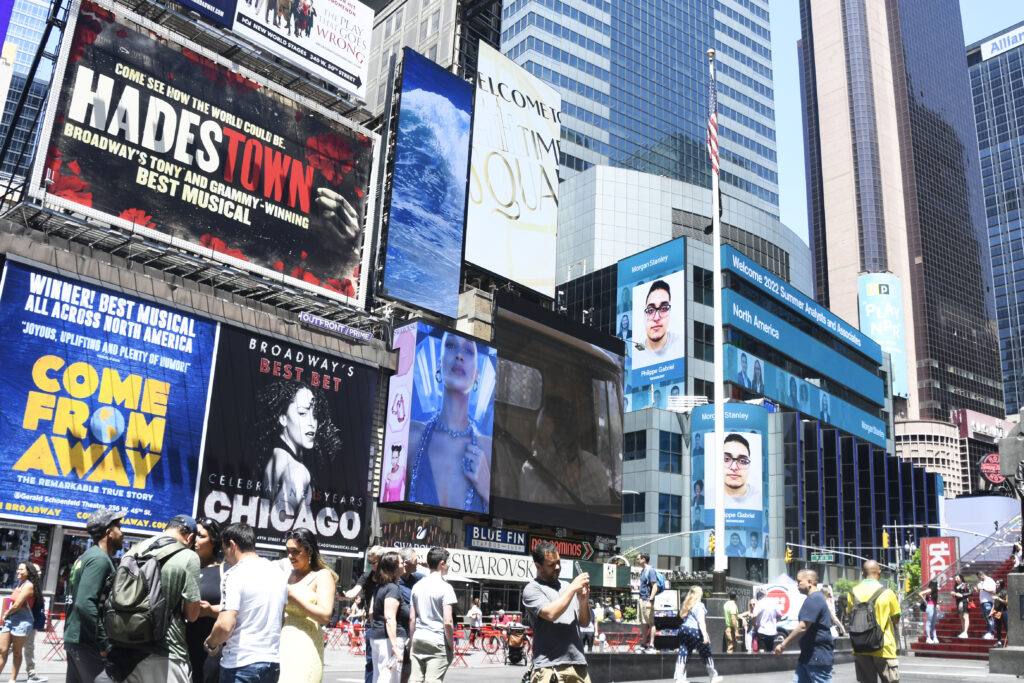 New York is the cosmopolitan city of the United States, it has almost 9 million inhabitants in its urban areas and almost 25 in its metropolitan area. It is made up of five Boroughs and is known as a Global City for its worldwide influences in media, politics, economics, education, tourism, architecture, entertainment, arts, fashion and culture.

In addition to the large number of inhabitants who reside, we must add another large number of workers who travel from other cities in the country and the world, and the millions of tourists who visit the main attractions to observe, enjoy and take photos.

New York’s tourist attractions are as diverse as they are unforgettable. In the

Big Apple you can visit the Empire State Building, the Statue of the

However, among its most prominent tourist spots is the heart of New York, Time Square. This place receives about 50 million people a year, eager to explore each sector of the city in depth and who take the opportunity to look at the luminous Billboards that are part of movies, television series, artistic works and photographs that toured and tour the world. .

The unmistakable illuminated billboards of Times Square are probably the biggest attraction of the square, as the faces and products they project fill everything, wherever you look.

The center of the area is the square, which is located at the intersection of Broadway and 7th Avenue, in Midtown Manhattan. Despite the fact that its name indicates it, it is not a typical square since Broadway Avenue crosses it diagonally, so Times Square is made up of two triangular squares.

dazzling and impressive for tourists and one of the most visited in the world. Surrounded by many shopping centers and giant screens, its lights, sounds and billboards attract the attention of pedestrians and drivers, making it a unique tourist spot in the world.

The lighting of the billboards has a particular record that allows to explain the clear visibility that the signs of Times Square have; can be seen from space. According to images captured and published by NASA a few years ago, the lighting on the billboards is so intense that it can be clearly seen thousands of kilometers from Earth.

The advertising value for brands in Times Square is very important, since large advertisers consider and are aware that if a brand is not in Times Square, it is not that important. For this reason, the best companies choose to invest money in advertising in this place, understanding that it is key to improving the finances and economy of their brands. All the money they invest will be returned in sales, since consumers choose the brands they see in the Big Apple.

average daily. This makes it one of the most popular tourist attractions

crowded for the general public and in paradise for specialists in

Advertising in Times Square is direct and effective, giving visibility to smaller brands and further increasing the popularity of the giants.

of the world, who choose this place for the incredible response of the

As the years have passed, brands have been perfecting their campaigns, achieving marketing milestones, remembered today. Some of the best Times Square ad campaigns:

-77 Kids uses an iPad kiosk and facial recognition to display multiple children’s faces on the screen.

-Forever 21 uses augmented reality where models interact with the public by taking pictures and bringing passers-by to the screen.

-Audi, has an interactive screen that includes QR codes, text messages, Foursquare checkins and a hashtag promoted on Twitter.

-HP, has Serena Williams on her screen where she fights a robot through 10 different screens.

-Toyota, allows the user to draw on their iPhone and their designs can be seen later on the advertising screen.

The cost of renting a fence for one day is $500, and we have different options:

For more information, go to www.welcome-to-times-square.com or contact us through Direct Message on the official social networks.