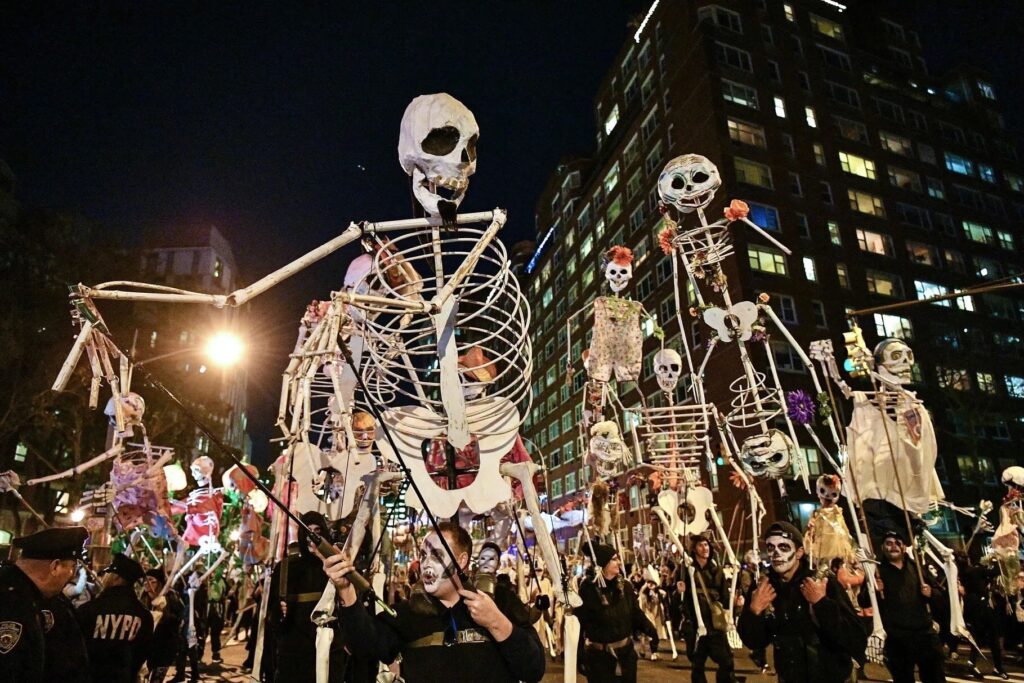 The 49th edition of the parade will take place today, Monday, October 31, in the middle of Halloween. The line for those who will join the parade starts at 6:30 in the afternoon and will end at 9 at night.

The exact start time will be at 7:00 pm and it is estimated that it will end around eleven at night. There will be a live performance promptly at 8:00 pm and a 2022 after party at Webster Hall.

Halloween, also known as Halloween, is an international celebration that moves people to dress up, ask for treats or even make jokes under the motto “trick or treat”. For many adults, this date also translates into theme parties and the perfect excuse to show off their best terrifying outfits.

The costumes of the first half of the 20th century were the really scary ones. Drawing on the pagan and Christian roots of the holiday, as a night to ward off evil spirits or reconcile with death, respectively, people often opted for more morbid and serious costumes than today’s pop culture-inspired ones. , according to Lesley Bannatyne, an author who has written extensively on the history of Halloween.

Before it became the family holiday as we know it, October 31 was deeply linked to ghosts and superstitions. It was seen as an ‘out of the ordinary’ day, when you acted outside the norms of society. The use of macabre costumes, not horror-inspired like those of today, but simply gruesome, was an essential part.

The origins of Halloween costumes can be traced back more than 2,000 years. Historians believe that the pagan Celtic festival of Samhain, which marked the end of summer and the beginning of the “darker” half of the year in the British Isles, is the forerunner of the holiday. It was thought that, during the celebration, the world of the gods became visible to humans, resulting in supernatural mischief. Some people offered treats and food to the gods, while others wore costumes, such as animal skins and heads, so that wandering spirits might mistake them for one of their own.

Hiding behind their disguises, the villagers often played pranks on each other, but blamed the spirits. Masks and cover-ups came to be seen as means of getting their way. That continued throughout the evolution of Halloween.

According to National Geographic, Samhain was transformed when Christian authorities appropriated pagan festivities. With the conquest of the Celtic territory by the Roman Empire, this festival was mixed with other festivals of Roman origin such as the Harvest Festival. In the 7th century, Pope Boniface IV decreed All Saints’ Day on November 1 to honor in a single day all those martyrs who had given their lives for their faith. Thus, the night before, the eve of Samhain, continued to be celebrated with bonfires, costumes and parades, but it began to be called All Hallows’ Eve, in English All Hallow’s Eve, which ended up resulting in Halloween. Halloween traditions differ at different points on the map, but generally there are the famous Halloween candy, trick or treating, spooky costumes, carving pumpkins, lighting bonfires, playing pranks, visiting haunted attractions, telling scary stories or watch horror movies.

Since the Church emerged, important Christian celebrations, such as Christmas, Easter and Pentecost, have vigils that begin the night before. For this reason, in many parts of the world, in the Christian celebrations of All Saints’ Eve, it is still a tradition to light candles on graves. Once Halloween entered American culture, its popularity spread rapidly, according to fashion historian and director of New York University’s Costume Studies Master’s Program Nancy Deihl. The 1920s and 1930s saw the rise of pop culture influenced costumes, along with the first major costume manufacturing companies. The J. Halpern Company of Pittsburgh, Pennsylvania, began licensing images of traditional fictional characters such as Popeye, Olivia, Orphan Anita, and Mickey Mouse. “People also became fascinated with posing as fringe figures in society,” he said, adding that pirates, gypsies and even homeless people became common outfit choices.

The meeting point to celebrate Halloween will be held in the neighborhood of Greenwich Villagen, in Lower Manhattan. The entrance line will be on 6th Avenue between Spring St. and Broome St. Spring, Dominick and Little Broome streets will be closed from both the east and west.

Today, November 31, the traditional Halloween parade will take place in New York. This will be the 49th edition that in other years has brought together millions of people, both citizens and tourists.

The parade is considered the largest of its kind in the world and is also known as Halloween Parede.