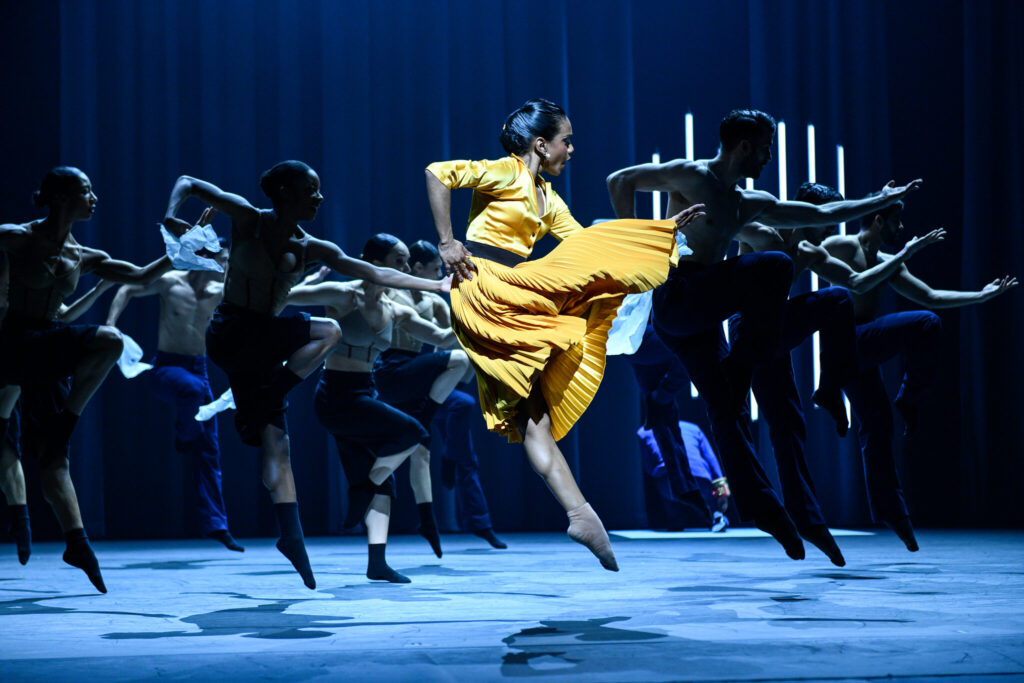 Forty-five years after the premiere of the musical Evita, the ballet presented by the Hispanic Ballet, one of the most important companies in that country, which was founded in 1970, presents Doña Perón which was premiered as a tribute to the fiftieth anniversary of its foundation, since it was delayed two years by the pandemic.

The great musical by Andrew Lloyd Webber and Tim Rice took his face to the marquees of Broadway and kept it for long seasons, and more than 25 years after Alan Parker, with Madonna on the royal balcony of the Casa Rosada, filmed the version for cinema, today, once again, a new reincarnation of Evita conquers the public of the United States. The leading role this time is of Dandara Veiga, a Brazilian dancer who is a figure of the Hispanic Ballet, and it is very likely that her name will be forever linked to the character of Eva, just as Patti

Dandara Veiga had among her great teachers Margarita Fernández in Argentina, and previously she was part of the Opus Ballet in Italy, and the Annarella Academia de Ballet e Danca de Portugal. The work, whose review was published by The New York Times, was part of the New York City Center Dance Festival as part of a tour that has already toured Detroit, Chicago and New Orleans, and will continue to other cities. The choreographer of “Doña Perón” is Annabelle López Ochoa, a famous former dancer of Belgian-Colombian origin who lives in the Netherlands. He had a successful career in Europe and then made it big in the United States. Later, her attraction to strong-willed women who played a key role in history led her to create two ballets dedicated to Frida Kahlo: “Broken Wings” and “Frida”. The choice of Evita is nothing more than a continuation of that line.

In a report to Playbill, the official magazine of theaters on Broadway, López Ochoa said: “There are ten scenes that explain how Doña Perón became Evita. It is an abstract conception, but there is a strong emotional intensity in each of the images we use. Her characterization is that of a girl rejected in her childhood, rejected by the oligarchy of her country when she became the First Lady. A person who came out of nothing and became everything. He loved power, fashion, and he fell ill with cancer at a very young age. The choreography dramatizes all of those elements, all of its stages.”

Peter Salem, a British composer with whom I have worked before.&quot; And he joked: “I assure you that no one will miss ‘Don’t Cry For Me, Argentina’, despite the fact that I really like that song, because this score is something else. It is based on melodies that embody all the emotions that Evita goes through throughout the 75 minutes that the work lasts. We use a live band, with bandoneon, that plays compositions inspired by the rhythm of Argentine dances, such as the chacarera, the milonga, the tango, and of course the waltz danced by the oligarchy, because in those days tango was conceptualized as a dance for the poor What part of this Ballet says: “What we set out to do, above all, was the portrait of a powerful woman, but without judging her. We reflect many moments of his past of deprivation and mistreatment to understand, also, what decisions he adopted later, but we do not take sides. Obviously, we are not Argentineans to do it.

The fundamental thing was that the dance was a poetic language to portray, poetically, a woman of her characteristics”. The review of The New York Times adds: “Nevertheless, it is difficult to leave Doña Perón; without admiring its protagonist, partly due to the narrative choices – which emphasize the personal over the political – and partly due to the brilliance of the main dancer of the opening night, the captivating Dandara Veiga”. Mark Eric designed the costumes that drive the plot, many of which come and go through changes in scenery. Veiga is soon joined by a chorus of dancers representing Evita’sworking- class followers, the descamisados, waving white handkerchiefs in
the air. His phrases in unison counteract the stillness of his posture: arms raised at right angles, framing his face, a recurring gesture that sometimes shudders into a frenzied movement, echoing the group. The sounds of a recorded speech and shouts of joy intertwine with Peter Salem’s dramatic original score, performed live, for bandoneon, piano, percussion, cello and violin.