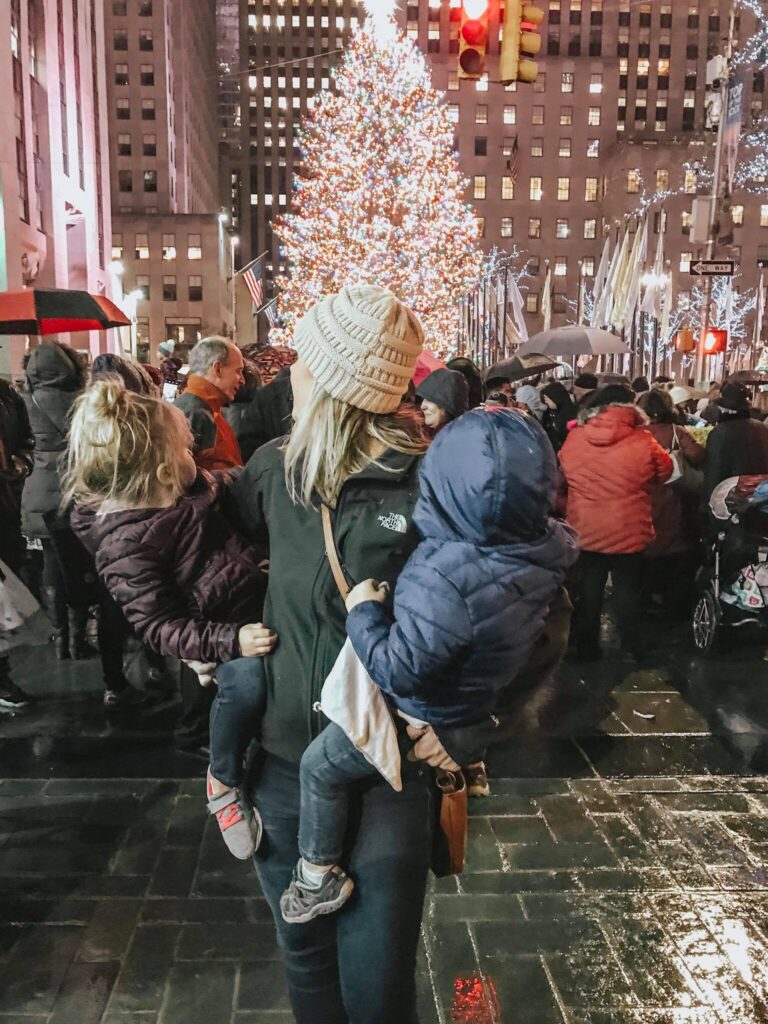 Christmas in New York with children

Christmas in New York with children

The vast majority of cities dress up and are filled with lights when Christmas arrives, but in New York it is from another planet. Not even the Grinch himself – the grumpy character created by Theodor Seuss Geisel – can escape the clutches of the Christmas spirit that invades you when you travel through the American city at this time. It is a great time to go visit this wonderful city with children.

If you find yourself planning a trip to the Big Apple for Christmas, here are some tips and our list of must-see places. We can think of hundreds of plans to do at Christmas in New York, but since time is limited on this type of trip, we suggest the best ones to enjoy with the family.

Ice skating is a great plan, one of the most fun and one of the best to warm up when the cold is very intense. The most famous rinks, perhaps because they have appeared more in movies and television series, are those at Rockefeller Center, Bryant Park and Central Park, but they are also often the most requested, and it is even advisable to book in advance at some. Luckily, there are more and more ice skating rinks in New York, such as the one at Brookfield Place or even the one on Governors Island, which opened on November 17.

Restaurants are also Christmas. Although all kinds of restaurants can be found in the city, there are some that take Christmas decorations to unsuspected extremes, such as Rolf’s, full of onlookers and Instagrammers who do not stop taking photos inside.

New York has its own Christmas markets. In them you will find products with a handmade touch, clothing, accessories, chocolate, Christmas sweets… Cinnamon rolls and hot cider are favorite delicacies. Among the best known are the one in Union Square, the one in Bryant Park and others such as the one in the southwest corner of Central Park or the one inside Grand Central Station.

Christmas trees in New York collapse the streets during their lighting – the Rockefeller one has a televised ceremony behind it and is crowned with a star from Swarovski. In addition to the Rockefeller Center, other essentials are Bryant Park or the New York Stock Exchange. There are also impressive ones inside the New York Metropolitan Museum (MET), the New York Public Library or the Plaza hotel, for example.

You have to travel from Manhattan to Brooklyn and let yourself be carried away by the Christmas sparkle in the Dyker Heights neighborhood. A real neighborhood competition to win the title of the best (or most) decorated house takes place in its streets. So you have to bring your camera ready, a lot of clothing and enjoy this free show for passers-by.

In the Broadway district, any musical show is a delight, but if you visit it at Christmas and with children, The Rockettes’ Christmas Spectacular is undoubtedly the most important. Almost a century old, these dancers perform a show marked by choreography and settings in which all that remains is to snow. They have been adapting to the passage of time, even introducing virtual reality elements into the show. Almost impossible to get out of there without singing the Jingle Bells…

Whether you like to go shopping or not, shopping centers are true creators of entertainment during Christmas, due to their shop windows or the shows they put on. Two are, for us, the main ones: Macy’s dresses its windows with real Christmas stories, but Saks Fifth Avenue puts on a projection on its entire 5th Avenue frontage that draws crowds of pedestrians every 10 minutes or so, when it gets dark. underway at sunset. But these centers are not the only ones: the nearby Bergdorf Goodman are not far behind, with an extra touch of class if possible, and the most exclusive stores in the area dress up for the occasion, with their best clothes and there you can find everything what do you need.

Street lighting is one of the most striking things. In addition to the shop windows themselves, in New York you will be able to find special illuminations for these dates in various places. The interior of Brookfield Place does not usually fail and now neither does the Hudson Yards area. As if that were not enough, for some time now veritable light exhibitions with special themes have been set up. Some are located inside enclosures such as the Brooklyn Botanical Garden. Others like LuminoCity or the Winter Lantern Festival put on true shows on a larger scale with special themes.