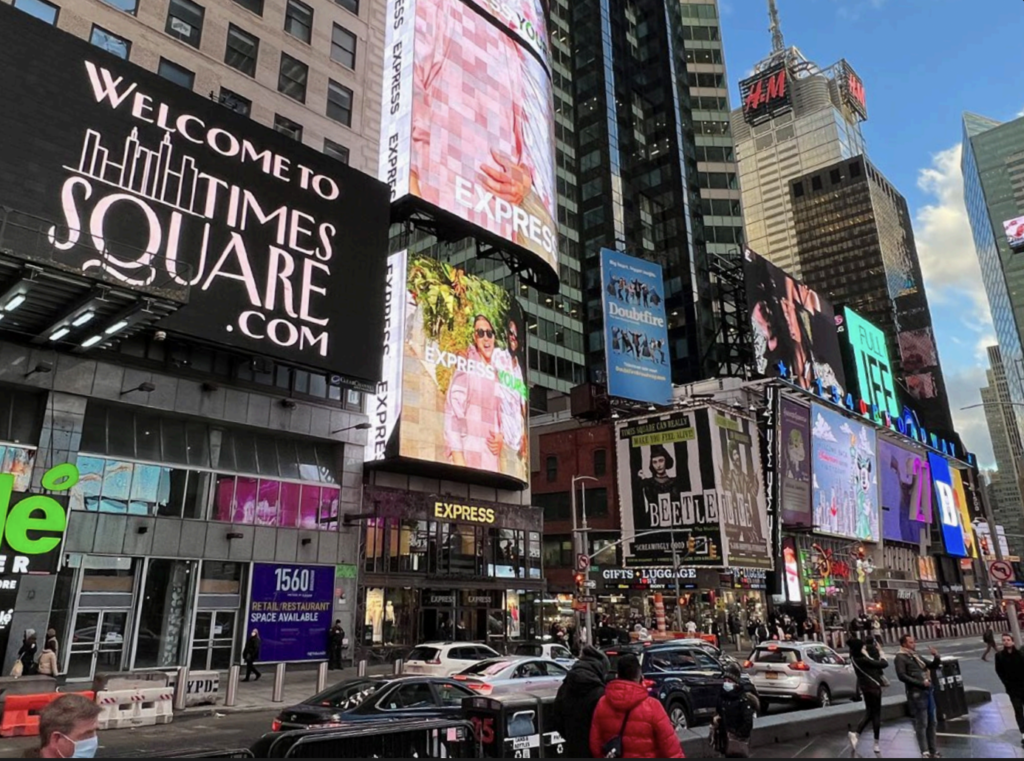 What’s behind the big square? The famous New York square is one of the most dazzling attractions for tourists and one of the most visited in the world. Lights, sounds and Billboards. Anyone who visits it can meet famous artists from different countries of the world. The most important thing in this tourist center is to be attentive to everything that happens around you and not miss any detail. Hated and loved in equal parts, thousands of people -and characters- of the most varied pass through it daily. Located in the center of Manhattan, it leaves no one indifferent.

Its bright signs have been part of movies, television series, artistic works and photographs. Today the municipal ordinances continue to protect its presence, forcing the owners to cede the facades for advertising purposes, something that brings them multimillion-dollar profits. The truth is that some of the neon lights that have been displayed here have become authentic works of art.

Despite the fact that the rental price of these spaces is stratospheric, the big advertisers, aware that if they are not in Times Square they do not exist, agree to shell out exorbitant amounts.

The light from their posters is so intense that it reached NASA from space. The intensity of the illumination of the billboards in Times Square is perceived from space. At least this is what emerges from the images that NASA captured a few years ago.

Among the celebrations that mark a great precedent for this place are the New Year and, for more than a century, The New York Times has organized a great party in honor of its new building and has only been interrupted twice. This celebration, known as Ball Drop, begins at 6:00 p.m. – when the ball is raised – and ends at 11:59 p.m., when it descends for 60 seconds from the One Times Square building.

You can also enjoy a new attraction that concentrates all eyes on the Plaza: it is a Ferris wheel with a height equivalent to an 11-story building. The huge Ferris wheel is more than 33 meters high, equivalent to a building of about 11 floors. The attraction began operating on Broadway, between 47th and 48th streets. Admission requires the purchase of a ticket. Once at the top, the experience lasts about thirty minutes, which allows you to have privileged views of the Big Apple. From twelve noon to midnight, the lucky ones who can and wish to participate will be able to do so until next September 12.

All very nice and bright, but brightness has its price. Advertising in Times Square comes at a high cost to businesses. The high visibility and the number of visitors increase the price for sponsors on an annual basis. According to Times Square NYC, in 2018, the famous site received an average of 390,368 daily visitors. This makes it one of the busiest tourist attractions in the world. For marketers, Times Square signage advertising requires approximately 1.5 million daily impressions. It costs between $1.1 and $4 million a year to buy advertising space in Times Square. Also, it can cost up to $3 million per month to advertise on the biggest time square billboard.

Some of Times Square’s best ad campaigns: 77 Kids uses an iPad kiosk and facial recognition to bring multiple children’s faces onto the screen. Forever 21 uses augmented reality where models interact with the public by taking photos and bringing passers-by to the screen. Audi has an interactive screen that includes QR codes, text messages, Foursquare checkins and a hashtag promoted on Twitter. HP, has Serena Williams on her screen where she fights a robot through 10 different screens. Toyota allows the user to draw on their iPhone and their designs can be seen later on the advertising screen.