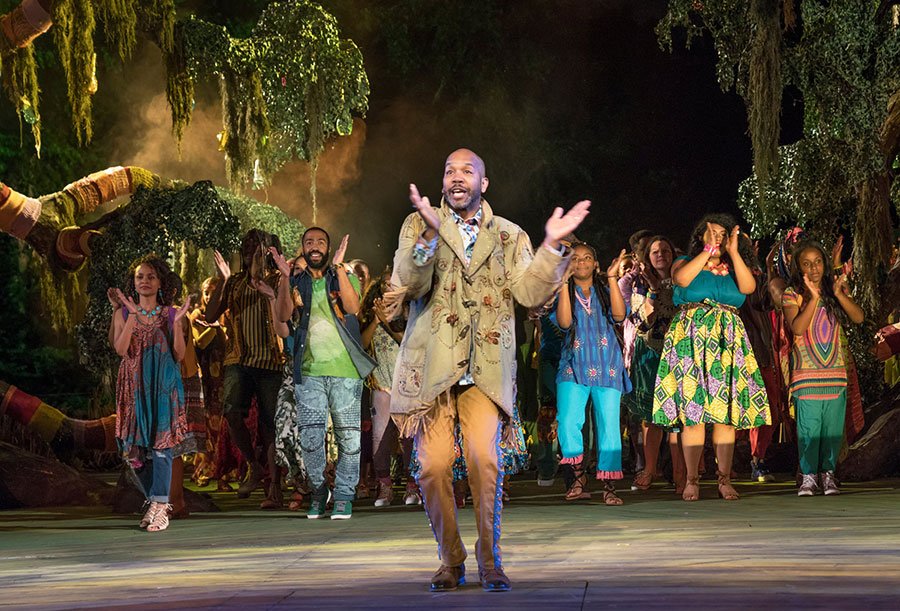 The adaptation of the comic play by William Shakespeare “As You Like It” (As you like it) that is performed this summer in Central Park seeks that its stage and audience are as diverse as a New York subway station, according to Efe the playwright Laurie Woolery.

Como gustas (in English, As You Like It) is a comic play by renowned writer William Shakespeare, written around the year 1599. It was included in the First Folio (1623) as the eighth of eighteen comedies, following a chronological order. It is a work considered by many critics to be the most mature and elaborate Shakespearean comedies, in which classic elements of the genre converge. It is part of the pastoral convention and incorporates, in this way, many of its characteristic features: the opposite nature to the court, disguised characters, the treatment of love affairs, the game of identities, and personal discovery through loss and loss. Recovery.

As You Like It is a comedy game that examines sibling family rivalries, and the role that love can play in overcoming disputes. Orlando and Oliver are brothers who are fighting bitterly for their inheritance.

In an attempt to innovate the conventions, he adds the interaction between the sexes, the family conflict around inheritance and the ambition for power.

Shakespeare was an English playwright, poet, and actor. Sometimes known as the Bard of Avon (or simply the Bard), he is considered the most important writer in the English language and one of the most famous in world literature.

Shakespeare is generally recognized as the greatest writer of all time, a unique figure in the history of literature.

Woolery, who is directing this wonderful play that will be performed until September 11 in New York and whose tickets are free, points out that on a subway platform in the Big Apple one can “witness humanity in technicolor.”

“That was the idea, we wanted to make sure that the theater reflects the diversity of the world around us and our city specifically, it’s very important to us because often in American theater you don’t see that either in the audience or on stage,” mentions the American, daughter of an immigrant from El Salvador and a farmer from Texas.

To achieve this diversity, the also director of the Public Works organization of the Public Theater of New York highlights that it has been key to work with various communities distributed throughout the city’s neighborhoods through different social centers.

Among the more than 130 people who make up the cast of this musical there are both professional and amateur actors, that is what is wonderful and unique about this work.

An example of the second group is Guadalupe Herrera and her son Daniel, who auditioned for the play after learning about the possibility at a center in the Bronx, where the mother takes classes for adults in Spanish and the young man takes design classes in fashion.

Pablo Hernández Basulto, manager of community impact at Public Works, remembers the surprised face that the relatives of these two New Yorkers had when they saw how 1,800 people applauded them at the end of the work.

“DISTILL” THE WORDS OF SHAKESPEARE

The other objective of this production that tells various love stories and family dramas is that the words of the 16th century English author can be understood by a diverse audience.

“When I was younger and studying an English language major, I was intimidated by Shakespeare and felt stupid for not understanding it,” notes Woolery.

“I understand that feeling of intimidation and I don’t want anyone to feel stupid,” adds the director.

Woolery describes the work he did with Shaina Taub and Shakespeare scholar Jim Shapiro as a process in which they “distilled the words of Shakespeare” until they were left “with an essence that people today can understand”.

In some of the songs of this work that should have reached the lung of Manhattan in the summer of 2020, but that had to be postponed due to the pandemic, they include some of the original verses of Shakespeare.

However, there are also clear nods to the present, such as when Orlando sings about his love for Rosalind, he is accompanied by a chorus inspired by the NSYNC pop band or that Charles, the man Orlando has to fight, is a fighter of Lucha Libre who speaks in Spanish.

“Shakespeare’s plays are about all kinds of people and I really think that Shakespeare was a community playwright,” emphasizes Woolery, the director and explains that the central themes of the works of the also poet usually deal with “love, betrayal, abandonment and injustice” concerns that continue to weigh heavily on the lives of ordinary people in the 21st century.