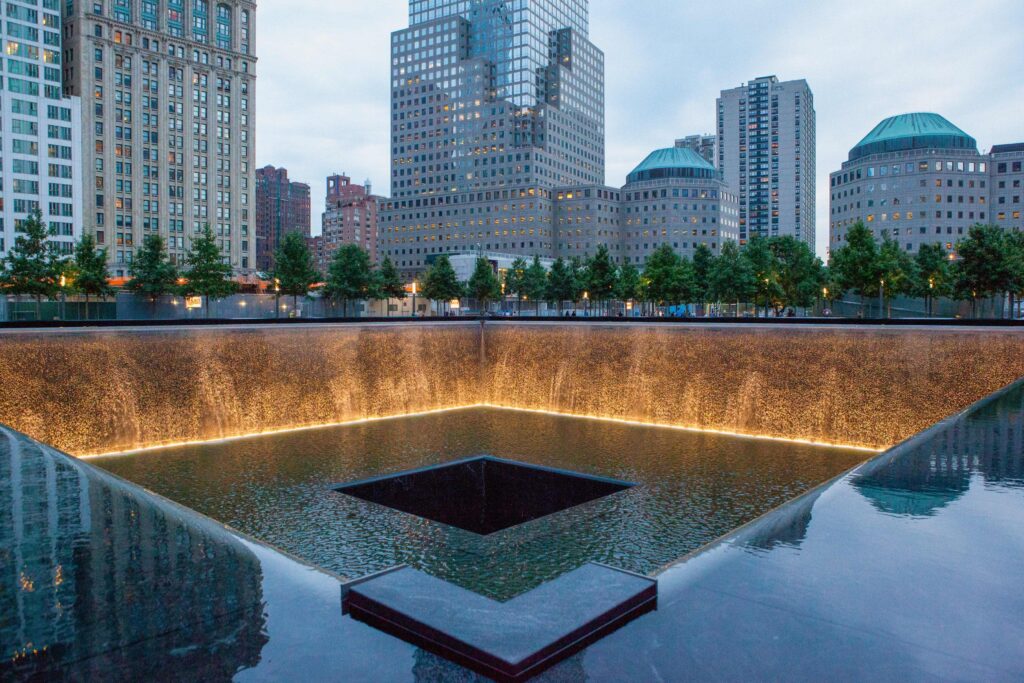 The 9/11 Memorial is a must-see for any tourist coming to New York. It is a place full of energy capable of transmitting many sensations and emotions to its visitors.

The 9/11 Memorial is a monument located at Ground Zero in New York, it is a tribute built to remember all the people who lost their lives in the terrorist attacks on the World Trade Center in 2001 .

The attacks of September 11, 2001, also commonly known by the numeronyms 11S in Spanish and 9/11 in English, were a series of four suicide terrorist attacks committed in the United States on the morning of Tuesday, September 11, 2001 by the militant Islamic terrorist group Al Qaeda.

The 9/11 Memorial is an oasis of tranquility located in the heart of New York that reminds us of the past and fills the future with hope.

The 9/11 Memorial occupies half of the World Trade Center area, forming a surprising contemplative space, right in the center of the city.

It is located on the site of the Twin Towers, where two huge fountains flow into striking and incredible artificial waterfalls. On the side panels of the fountains you can see the names of the victims in the tragic event.

The memorial has 400 oak trees that give it a living and ever-changing character. Among the different trees there is one that stands out in particular, it is “The Surviving Tree”, it is a tree that survived the catastrophe and has been preserved in the area as a symbol of survival and rebirth.

The memorial has a museum dedicated especially to the victims of the attacks. The museum’s collection has more than 10,000 objects, including the testimonies of some survivors, objects belonging to the victims, material recovered from the rubble and numerous elements that illustrate the massacre.

The World Trade Center was rebuilt after the 9/11 terrorist attacks to become one of the most significant symbols of New York.

The World Trade Center area has also undergone many changes over the past few years, these are some of the highlights that are worth visiting.

This site is known worldwide due to the terrible terrorist attacks that occurred in 2001, the World Trade Center (WTC) was the complex where the Twin Towers were located, a symbol of the power of the American economy since its opening in 1973 .

On September 11, 2001, the World Trade Center was devastated, taking with it the lives of almost 3,000 people and leaving more than 6,000 injured who were marked and affected for life.

The area where the incident occurred then became a huge crater full of works with a promising future, which was renamed “Ground Zero”.

Although there is still much work to be done, the World Trade Center area is currently practically completely renovated and has several recently built buildings.

After the disappearance of the Twin Towers and the demolition of some neighboring buildings, it was very necessary to completely rebuild the area. Among new masses of steel, glass and concrete, the One World Trade Center stands out, it is a bright and dynamic building inaugurated in 2014 that has become one of the main landmarks of the city.

The main building of the new World Trade Center offers the possibility of contemplating the pulse of the city with a great and incredible view from the viewpoints that it has on three of its upper floors. The views from One World Observatory are spectacular, but the historical and emotional weight of the building and its surroundings is also important. If you are going to visit it, it is essential to buy tickets in advance.

Paying homage to the past and trying to fill the future with hope, the 9/11 Memorial is a haven of peace in the heart of the city that has 400 white oak trees and amazing waterfalls that fill two pools representing the missing towers twins

The museum opened in May 2014. The 9/11 Museum pays tribute to the nearly 3,000 victims of the unfortunate event. The museum has photographs, voice recordings, some of the vehicles used on the day of the disaster and endless elements capable of transporting its visitors to the terrifying moment of the attacks.

The WTC Central Station was designed by Santiago Calatrava, the huge and striking central station is crowned by an emblematic glass and metal dome with the characteristic Calatrava stamp and connects numerous train lines, subways and large buildings in the financial district. The construction of the “Oculus” has been delayed for more than 6 years and has had an extra cost of 70%.